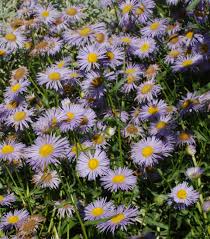 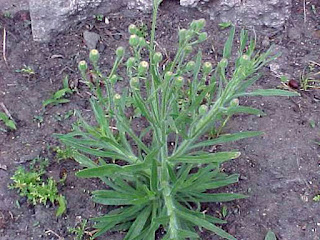 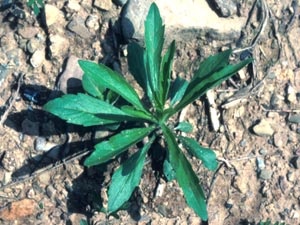 FLEABANE is a member of the Asteraceae (daisy) family. There are mixed reviews as to the plants origin, some say that it originated in North America while others say it came from Europe or Asia. Wherever it came from it can now be found all over the globe. It is a lovely plant with terminal, flat headed, yellow flowers (you can also find them to be pink, white, lavender, red or blue depending on the variety) that are about an inch across. The stems are kind of furry and can be very leafy. The leaves tend to be arrow or heart shaped near the base of the stem while those near the top are more pointed and narrow. Some varieties also have toothed leaves and are also somewhat fuzzy like the stems. Depending on the variety it can be anywhere from 18 inches to nine feet in height. It is a grayish green color and enjoys a variety of growing areas (again according to the species) from meadows, fields and waste places to ditches, riversides and watery areas. Some even seem to enjoy rocky, dry soil. It blooms from June to September and should be gathered while blooming and dried if not using immediately. It was one of the very first ‘weeds’ to have developed an immunity to glyphosate (tells you how strong this plant is). This plant is also considered to be a sister plant to elecampane which opens up a host of medicinal possibilities.

The Greek term Erigeron comes from ‘eri’ meaning ‘early’ and ‘geron’ meaning ‘old man’. This sounds like a contradiction in terms but really refers to the grayish hairy substance that appears on top of the seed heads.

Several native American tribes used this plant. The Lakotas would make a tea from the plant for children, to aid with sore mouths as well as for adults with urination issues (the lack thereof). The Navajo would use the plant to make lotions for headaches and body pains. The Mesquakies would powder the flowers and make a snuff for head colds or to dry up mucous conditions. The Cherokee would infuse the root for applications in coughs, colds, menstrual issues, bad vision, hemorrhaging, kidney problems, epilepsy and gout. They also used the same concoction to heal a woman’s body from miscarriage. The Ojibwa used it for tuberculosis as well as for hemorrhaging. The Blackfeet used it for diarrhea and dysentery. The Catawba used it to help with cardiovascular issues. The Cheyenne would boil the plant in water and inhale the steam for head colds and respiratory complaints. Other tribes used it for stomach issues, intestinal parasites, rheumatism, lameness and as an insect repellant. They would also boil the plant in sweat lodges and burn it to create a natural insect repellant. The blossoms were mixed with brains, buffalo spleen and gall to be rubbed on hides during tanning. They also used the plant as a dye and for friction fires (the stalk) which is why some tribes referred to it as ‘fire-maker’. The Mexicans used it for toothaches and to make tooth powder. The early settlers would stuff their mattresses with it and hang clusters of it in their homes to drive away fleas (hence the name flea-bane). 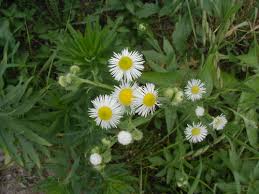 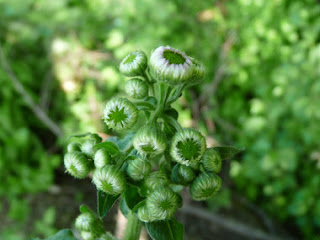 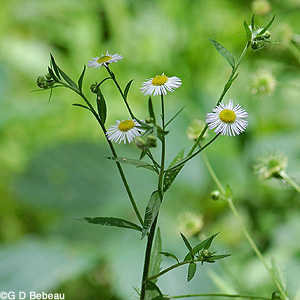 Linnaeus was told by the Russian General Keit that his soldiers had been cured of dysentery by this plant when in Persia. The Arabs called this herb ‘Rarajeub’ which roughly translated means ‘Job’s Tears’. They believed Job used it to cure his ulcers.

As with most herbs-this plant also has a mythological beginning. It is associated with Hephaistos-the god of the Forge. He was the son of Hera and was believed to have no father. He built golden android like women to help him in his craft but these women were intelligent and outspoken and nothing like robots. It was believed that a blow from his hammer freed Athena from Zeus (he made weapons for both on his forge as well as other gods such as Hermes and Aphrodite) and because he stood up to Zeus (as did his mother), he was tossed out of Olympus. This is where the story kind of goes south. The legend has it that Hephaistos tried to force himself on Athena but she managed to get away. His ‘fiery’ seed was said to have fallen to the Earth creating a ‘serpent man’ named Erikhthonios-who became the first king of Athens. This seed also created the plant fleabane (so the story goes). In early Greek texts the ‘semen of Hephaistos’ refers to fleabane and as such it is considered to be a fire herb.

Culpeper refers to this plant in his writings as well. He said the English call it ‘mullet’ and that it is a hot and dry plant. He states that,

“The herb being spread under foot and smoked in any place, will drive away venomous creatures and will kill and destroy fleas and gnats. An ointment of the root and leaves
is used with success for the itch.”

For whatever reason, this herb was really never used medicinally in Britain. Although in Miss E.S. Rohde’s ‘Old English Herbals’ stated that binding fleabane to your forehead helps to ‘cure one of the frensie’. (I can only assume she meant seizures). Perhaps what it is most well known for today is for urinary issues and sexually transmitted diseases. Recent studies have found that it does contain some antimicrobial and antibacterial capabilities. It contains a host of terpenoids and creates an oil similar to turpentine. It also contains some powerful antioxidants such as quercetin, thymol and kaempferol. As it appears to have a beneficial effect on the capillaries it has been found to be quite useful for any type of mucous condition. It also has been helpful for uterine hemorrhaging although it seems to work even better when cinnamon is present. It has also been beneficially employed for chronic diarrhea and dysentery, for tympanitis, muscle weakness, flatulent colic, back pain, blood clots, colon issues, cholera, diabetes, cystitis, kidney stones, nosebleeds, bronchitis, sore throat, boils, tonsillitis, tumors, for menstrual issues, as a wash for head lice and for ANY type of urinary disorders. 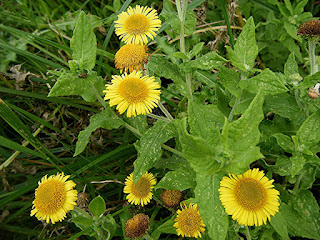 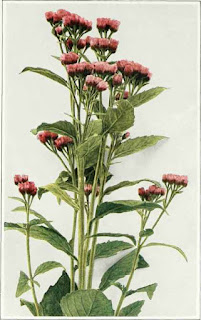 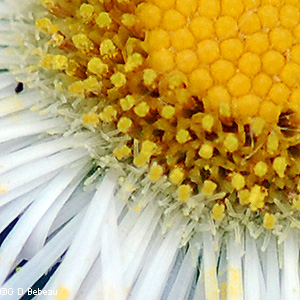 One particular story was of a man who had been in an accident and had some bruised ribs, a dislocated hip and a badly bruised shoulder. He relates that for several days he had been coughing up blood after the incident. One day while coughing, he made a cup of tea with fleabane, cinnamon and honey. He said the bleeding stopped before he even finished his cup of tea. Another story was of a man who contracted dysentery in the early 1900’s. His mother was told about fleabane by a travelling salesman and she used it to save her son’s life.

Dr. Dupuy, who examined the plant in depth, found the essential oil called Oleum Erigerontis (aka the oil of Erigeron). It is not easy to find but it has been found to be very styptic and astringent. The oil has been used for high blood pressure, neuropathy, hepatitis, hormonal balance in women, as an anti-aging element as well as for all the rest here to for mentioned. The oil is believed to stimulate both the liver and the pancreas and mixes well with cilantro, citrus, spearmint, cardamom and coriander oils.

The leaves of this plant are considered edible although not well liked from my research. When bruised the leaves smell like soap (so one can imagine how they taste…). This plant is used mostly as an infusion, a decoction or a tincture. The oil is very useful if you can obtain it (www.theoilshop.com).

According to WebMD, people who are allergic to the ragweed family should avoid this plant as it may cause an allergic reaction. Some people who are extra sensitive may get contact dermatitis from fleabane. WebMD also states that this plant should be avoided by pregnant and nursing women. As with any herb, consult your physician before starting any herbal product or herbal regimen. 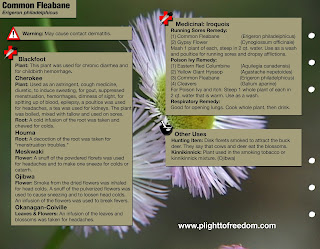 As is customary with my posts I am including some links below for your perusal.  Use them wisely!  Stay healthy and strong!